This website is my private project. You can contribute by giving your feedback.

When you misuse the Bible for judging other people instead of judging yourself.

The Catholic Church officially renounced from biblicism only quite recently, during the Second Vatican Council in 1965.

Protestant Christian denominations continue to suffer from biblicism because Luther replaced the Pope by the Bible. If I had been living 500 years ago, I would fully agree with Luther. On the other hand I can imagine that if Luther would see how the Catholic Church has learned since then, he would be the first to return to the Catholic Church.

Biblicism is an expression of our desire to “give a name” to God, to understand Him.

Biblicism can be our answer to the healing effect of reading the Bible. When you discover how much these texts help you to get a healing glimpse into the Good News, then you are tempted to conclude that the texts themselves are the source of your salvation.

Biblicism is partly caused by an old vocabulary problem. See Word of God.

The screenshot on the right is an example of extreme biblicism. Note how the Bible is listed even before God. 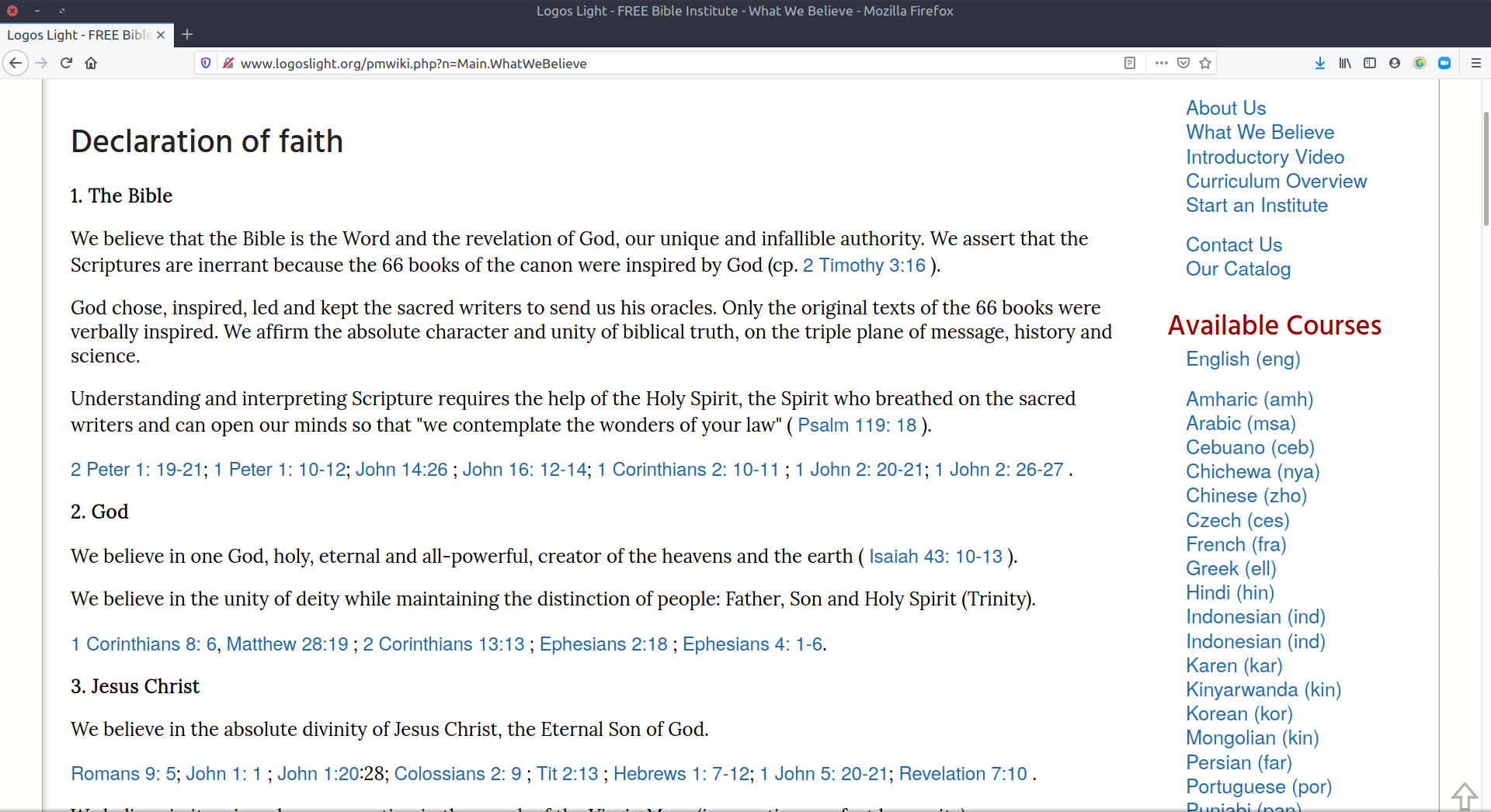 A biblicist explains (here) : A proper view of Scripture is that the Bible is the ultimate authority. “All Scripture is breathed out by God and profitable for teaching, for reproof, for correction, and for training in righteousness” (2 Timothy 3:16). (…) Since the Bible is “God-breathed,” it is in fact authoritative, infallible, and internally consistent. It must be allowed to have the final word on everything. How could Scripture be profitable for “training in righteousness” if it cannot be trusted as absolutely true and consistent?” My reaction: How can you believe that a text is “God-breathed” just because it claims to be so? And when you read “All Scripture”, how can you exclude other scriptures than those that were selected into the canon several hundred years after the text you quote was written? And when you read “profitable”, how can you extend this into “in fact authoritative, infallible, and internally consistent”?

Another scaring example of biblicism is the following text, which was not written 500 years ago, no, it was published in October 2020 when Donald Trump was trying to become president for another time. Evangelical author Grayson Gilbert writes:

The Democratic Party has built its entire platform off of two major issues: abortion and sexual anarchy. I will state at the beginning of this that no Christian can support the Democratic Party. I have no qualms expressing such. I find it hard to believe that professing Christians could even find this topic worthy of debate. Per Scripture’s own stance on the evil of abortion and sexual licentiousness, these issues really are about as black and white as they can get. There is simply no room within the historic Christian faith to disagree. What we are dealing with then is a simple rejection of these issues as matters of primacy. Scripture is quite clear that the shedding of innocent blood is abominable (Pro. 6:17). –You Can’t Be a Christian and Support the Democratic Party

I didn’t waste my time to read this text until the end (enough other people did this because it was a few weeks before the elections). My reaction was to just quote what pope Francis writes about it in paragraph 86 of his Fratelli Tutti):

I sometimes wonder why (…) it took so long for the Church unequivocally to condemn slavery and various forms of violence. Today, with our developed spirituality and theology, we have no excuses. Still, there are those who appear to feel encouraged or at least permitted by their faith to support varieties of narrow and violent nationalism, xenophobia and contempt, and even the mistreatment of those who are different. Faith, and the humanism it inspires, must maintain a critical sense in the face of these tendencies, and prompt an immediate response whenever they rear their head.

Seventh-Day Adventist Ulli Scherhaufer explains why his church is the closest to the “biblical truth”. He develops an impressive theory about how humanity “fell” away from the “pure teaching” given to Moses on the Sinai, how God started to “restore” it through Martin Luther and how this restoration evolved through Lutherans, Baptists, Methodists and finally the Seventh-Day Adventist teachings. He explains that Jesus himself criticizes a faith that relies on traditions, and calls us to walk in the light and search for “the truth that is contained only in the Bible”. https://www.dasgeheimnis.de/web/religionen.htm

Biblicism is the opposite of the Gospel¶

But already the Old Testament contains hints that one day God will pour out his spirit into our hearts, change our “hearts of stone” into “hearts of flesh”.

Jesus brings a revolution to this understanding of what a Holy Scripture means to our faith. He says “Loving God and your neighbour is more important than obeying the scriptures. “The Sabbath is there for man, not man for the Sabbath.” The scriptures are made by humans, they are not the Word of God, I am the Word of God.”

Jesus sheds a new light on the role of Scripture for our faith.

And Jesus died on the cross before a single word of his message was written down. It took a few generations for the Church to understand that the world is not going to an end immediately and that they need to somehow write down this message.

Unlike other religions, Christianity is not based on a set of documents written by their central single teacher. The central authority of Christian religion is a person, not a book.

Biblicism misses an important aspect of the Gospel. It focuses on the theology of atonement, which is an answer to the question “How can God be merciful and just at the same time?” But atonement is only a side effect of the Gospel. The Gospel is more than atonement.

Biblicism inverses a basic point of the Gospel, which calls us to never fully trust in any Holy Scriptures.

History gives us many sad examples of humans who fight against and even kill each other because of their differing interpretations of the Bible. This shows that the Bible is only an image of the truth and not the truth itself. You may read the Bible thoroughly and still miss the Good News. You may live in the light of the Good News without ever having read the Bible.

Biblicism refuses to recognize the plurality of the biblical canon.

Biblicism says that the Bible has been “written by God himself”.

Biblicism is when you worship the Bible instead of worshipping God.

Biblicism makes you refuse to accept scientific evidence when it conflicts with something you read in the Bible. Refusing to see scientific evidence as a more trustworthy tool than a Holy Scripture is a form of superstition and leads to unrealistic results.

In You and your bible! I try to imagine what God might say about biblicism.

I believe that this understanding of the Bible is a misconception. The only authority regarding ethical questions is God, and as Christians we must not forget that God’s name remains “holy”: beyond our imagination and unreachable to our mind. Consequently we cannot fit God into a collection of texts. The Bible is illustrative and inspiring, but not authoritative.

Jason D. Bradly has some interesting thoughts to share for people who believe to know the Bible quite well: Biblical Illiteracy Is a Big Problem–for Christians. Some highlights: “Saying that reading the Bible cures biblical literacy is kind of like saying that malnourishment is cured by eating. The truth is that a lot of people are malnourished because of how they eat.” “[Y]ou need to be careful not to read Scripture in a way that merely supports or champions your position.” “If you think the Bible always agrees with you, that’s one of the biggest signs that you’re biblically malnourished.” “The problem is that the people who should be reading [the Bible], usually don’t. And when they do, they’re scouring it for confirmation and not inspiration.”

If you don’t agree with my views, then here are some questions I want to ask you.

Consider that John 1:14 says that the Word was made flesh, not it was made book. And 2 Cor 3:6 says “He has made us competent as ministers of a new covenant–not of the letter but of the Spirit; for the letter kills, but the Spirit gives life.”

How do you explain that a same text can have different effects on different readers depending on their personal history and the social and emotional context.

Do you think that my refusing the Bible as an authority is a form of individualism?

How do you explain statements like “It is by Jesus’ own teachings that we come to learn how to evaluate and discern when to apply or ignore those same teachings. (…) it’s not so much about our freedom to ignore Jesus, but rather quite the opposite: our necessity to become better disciples of Jesus, paying closer attention to the principles that undergird his continuing spirit filled will, rather than puppets who merely echo his historical words.”1

Vi La Bianca has some interesting questions for biblical literalists.

Matthew Distefano names 7 Reasons the Bible is NOT the Inerrant Word of God:

I have no problem with designating the Bible as “fully trustworthy” and “our highest authority for faith and life” (found here). These statements are normal because the Bible is our Holy Scripture and the only written definition of our faith. The statement that the texts of the Old and New Testament are “God-breathed, since their writers spoke from God as they were moved by the Holy Spirit” is a bit useless because this applies also to many other texts.

When you worship the Bible instead of worshipping God.

This was the name I gave to biblicism before I knew that name.

A methodology used in law, history and theology for interpreting biblical and philosophical texts and other content (like pictures, sculptures, sound or movies).

The idea that the Bible is inerrant, i.e. does not “fail”.

I don’t understand why the Roman-Catholic church still uses this concept.

Mathew J. Korpman in When It’s Okay to Ignore Jesus